A Christian organisation on Tuesday came to the rescue of squatters living in Mbare’s Joburglines area.

Chosen Generation, a group formed in the United Kingdom (UK) comprising of members from different denominations in the Diaspora donated food hampers to 12 families living shacks near Tsiga grounds in the suburb.

One of the organisation’s directors, Pastor Laureen Kandemiri stated that the thrust of their organisation was to bring people in need closer to God through giving as God will always make a way despite any given situation.

“As Chosen Generation our aim is to bring people closer to God and we are going to do whatever we can to make sure that everyone is taken care of.  Always know that God is there no matter your situation.”

One of the beneficiaries known as Joseph (30) who grew up in a probation centre and has nowhere else to go was very grateful for the donation.

“I thank Chosen Generation for this surprising gesture as I survive on begging and doing part time jobs and I do not have any proper accommodation, He said.

Another partially blind elderly couple was overjoyed by the donation which came “at the right hour of need.”  Nhau/Indaba

Previous Date Set For A Relaxing Evening With ManLuckerz
Next Deplorable! Some Hwange Schools Use Classrooms As Hostels 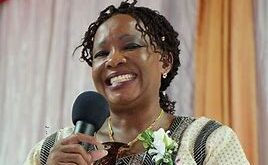 First Lady Advocates For The Preservation Of Ubuntu In Hwange