Personality, Pokello Nare is fed up of people labelling her a fake yellow bone such that she has gone the extra mile of posting her images when she was a child to prove that she does not bleach. No month passes by without Pokello, a former Big Brother Africa housemate popularly known as Queen of Swagger because of her fashion sense, being a topic on the Internet.

At times, people will be using her images to settle Twitter wars between countries and sometimes, they will be comparing her beauty to that of other socialites. In some instances, it will be claims of her dating high profile people. Just last week, she stirred controversy after claims that she said women in Zimbabwe do not know how to bath while addressing women at a grooming conference held in Harare.

As expected, Pokello was bashed by many with some claiming that they do not bleach like her.

This is just the life of Pokello who at times prefers to ignore the comments. But, at times she comes out guns blazing to defend herself, something she did today as she said she was tired of being bullied.

“Now I have learnt that when I remain quiet, it gives you the impression that it’s ok to lie about me. This bleaching agenda you try and push when it comes to my skin colour should Stop. It’s very shallow to think every light-skinned woman bleached. Here are pictures for your future archives,” tweeted Pokello as she shared her childhood images. All the pictures were of a young yellow bone Pokello who, in some images, looked like her son with former Big Brother Africa housemate – Elikem Kumordzie, Tristen.

Also showing that she is naturally a yellow bone, both her sons, Nathan and Tristen are light in complexion. 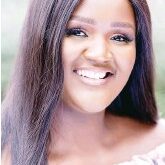