Digital mobile banking in Zimbabwe has matured beyond the proof-of-concept stage into mainstream adoption where it is servicing millions, driving local transaction volumes and furthering financial inclusion at the national level.

Falling under the FinTech and e-commerce categories, mobile digital transactions have impacted on the overall banking sector in different ways, providing competition for traditional banking while at the same time complementing the efforts of banks that have adopted mobile and tech to service their customers.

According to the latest statistics from the Reserve Bank of Zimbabwe for the month of December 2019, mobile transactions accounted for $19,3 billion worth of transactions, second only to transactions that went through the Real Time Gross Settlement (RTGS) system or the Zimbabwe Electronic Trading and Settlement System (ZETSS).

Just to further showcase how significant digital based transaction have become, events in November last year are clear testimony: In November, the biggest mobile transactions provider EcoCash set about to upgrade its system.

While initially the upgrade was expected to result in a 24-hour downtime of all EcoCash services, it ended up taking a little longer after facing stability issues.  The good thing though is that this was a planned upgrade and engineers were already hands-on, waiting for such an eventuality.

But what may have escaped the attention of the public during the planned but less-than-smooth upgrade is that EcoCash said at the time the upgrade was imperative; it had to happen because their software and hardware in use at the time was reaching the end of its lifespan, and its system capacity had hit maximum utilization levels. They wanted to enhance the system’s security and adopt the latest global security standards on the market.

Thankfully for EcoCash, the company successfully pulled off the upgrade, meaning they are now sitting on surplus capacity to take on more customers and more customer features for the coming years. They also now boast some of the latest FinTech software and digital financial services software on the global market.

Yet the modern digital banking and mobile transaction system upgrades come at a cost. They cost money –  in foreign currency. Such upgrades, which for tech-based businesses need to be done on a fairly regular basis, require significant CAPEX (capital expenditure) deployment.

It is the same for banks, as well as mobile money platform providers. Software and licence fees cost money in hard currency.

Zimbabwe is however currently transacting using a mono-currency, the Zimbabwean dollar, meaning operators will first need to convert their earnings into US dollars. But the local currency has been on a downward spiral since its reintroduction, from a rate of 2.5 to the US dollar at inception, to the current rate hovering above 17.5 to the green back.

This is at a time mobile money transaction fees have been static since the last tariff review in August 2019. The costs of running mobile money platforms also include other input costs, including labour, power (electricity and diesel) and value chain commission payouts, among others, which have tracked inflation – estimated at 521% in December 2019, as well as the weakening exchange rate.

In short, like any other business in Zimbabwe, the operating costs of providing a digital banking and mobile transacting platforms have become prohibitive, as a result of inflation and falling exchange rate.

When interruptions in power supply affected the Ecocash platform earlier last year, sister company Econet issued a statement that among other things highlighted that “the current foreign currency shortages in Zimbabwe made it difficult for the network to support its systems to levels which cater for unusual challenges such as a surge in traffic.” It went further and said “access to foreign currency would certainly enhance the robustness of these systems”.

Those words alone show there is some important work that is not being done. The telecoms industry, whose infrastructure carries the mobile money and digital banking platforms, is characterised by constant change and evolution. To keep pace, telcos should constantly enhance their services and continuously upgrade their network platforms.

The promotion of greater financial inclusion and stability entails the adoption of realistic pricing strategies in order to increase confidence levels in the payment systems. The ultimate objective in the development of payment systems is to ensure that financial services are safe, accessible, and convenient to consumers.

But with sub-economic charges in place, that could be a challenge whose consequences are too ghastly to contemplate. 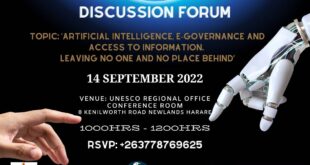 Access To Information Through Emerging Technologies Workshop On Today