By Daniel Kachere
Genius “Ginimbi” Kadungure’s “final party” had several mini events within it, which saw it touching almost every one’s life in Zimbabwe.

Even the elderly living in far-flung rural areas found themselves asking who this Ginimbi was. Top artists like Jah Prayzah and Killer T performed at the funeral wake while broadcasters like ZBC-TV and Zimpapers Television Network beamed event proceedings live into people’s homes and on the internet.

Nhau was also on the ground, providing millions with updates on WhatsApp.

Consequently, his funeral wake attracted all kinds of people including undesirables.

While his mansion was guarded by security that vetted and controlled those jostling to enter his fortress just to get a glimpse, mourners were left to their own devices.

Hardcore criminals and kleptomaniacs made a killing by taking advantage of the mammoth crowds that were at his funeral wake. At least four journalists doing live coverage of the wake lost their cell phones, cameras and other valuables.

Police were inundated with reports of lost cellphones, theft from car and even robbery.

One “mbinga” (rich guy) who lost his valuable iPhone 11, made an impassioned plea for whoever had “picked up” his gadget to return it for a reward of US$500.

Ginimbi attracted so much attention that members of the Zimbabwe Republic Police deployed along the road to his residence found it difficult to control motorists who thronged the venue to pay their last respects to the business mogul.

The heavy deployment of law enforcement agents did not help matters, thieves still remained in play, pouncing on the vulnerable crowd. Nhau/Indaba 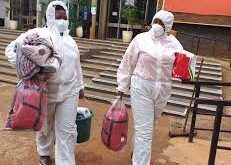