Hwange Members of Parliament have called for clarity and the community’s involvement in the granting of mining rights to foreign companies.

This comes in the wake of a standoff between the Dinde community and a Chinese investor over the latter’s proposed coal exploration operations in the area.

Villagers argue that the Chinese investors are in breach of environmental and customary laws of the country as they have not produced any documents granting them permission to work in the area nor engaged the community for their approval.

Hwange Central Constituency Member of Parliament Daniel Molokele said there should  be public due diligence when it comes to the granting of mining concessions.

“There is need of a clear public consultation of all concerned stakeholders. As the MP of Hwange Constituency, all the mines were opened without me being consulted or invited. It’s like I don’t exist. It’s the same now with this Dinde issue, I have no idea on what’s taking place,” said the MP.

Molokele said he is worried about the implementation of legislative procedures when it comes to the granting of mining rights in Zimbabwe.

“The responsible authorities have a weakness of secrecy, there are a lot of secrets before mining activities, hence excluding the community in their decisions,” he said

Member of Parliament for Hwange West Constituency Tonse Siansole echoed similar sentiments saying he  is concerned about random people coming to mine in the district.

“The Government  is issuing special grants without consulting the locals. Mining should not be prioritised at the expense of the locals,” he said.

Siansole  said Chinese miners working along Deka River have damaged the road while livestock is being poisoned because of the chemicals they deposit.

Since last year, villagers have been locked in a standoff with a Chinese investor, Beifer Investment over the proposed exploration of coal in Dinde.

The company moved on site two weeks ago to begin exploration works, but the standoff has affected commencement of the actual operations as villagers fear that once the project starts they will be forced to relocate. Nhau/Indaba 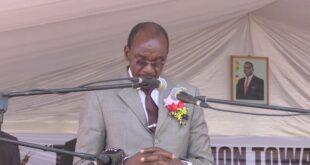